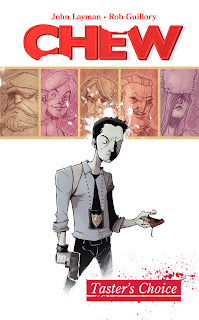 Image Comics' Chew is a certified hit after going through several reprints in floppy format, then topping the comic store graphic novel chart in November.  Admittedly, the premise is pretty neat.  A cop has the ability to receive psychic impressions from things he eats.  As a side effect, he doesn't eat much since the pesticides of fruit or the last moments of an animal are things that fill his mind whenever he does.  Except when he eats beets.  This power also makes Tony Chu a valubale asset to the FDA, who hire him and make him do some pretty disgusting things.  Or I should say, eat some pretty disgusting things.  Survivor was nothing compared to what this guy has to go through, usually involving cannibalism or something that's been rotting for days.  Chu also lives in a world where poultry has been outlawed, as many people allegedly died in some sort of chicken flu epidemic.  Because this prohibition is in place, the FDA has a lot of power and are always on the lookout for poultry smuggling, and likewise, most people hate the FDA for it, often treating Chu and his fellow officers with disdain, intentionally hampering investigations or slinging words their way (including Chu's own brother).  It's a neat sort of alternate reality Layman created here, and Guillory's fun, cartoony art lends itself well to the dark humor of the book overall.  This book loves to go for the gross-out moments, but it's also full of action, fun characters, and mystery.  As many people already know, if those sales numbers are any indication, this is a great idea for a book, and Layman and Guillory don't disappoint with the first collection.