The Book of Genesis Illustrated by R. Crumb 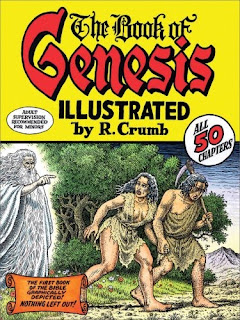 One of the biggest, most anticipated comic releases of the year is the five-years-in-the-making adaptation of the first book of The Old Testament itself, Genesis, by one of the greatest names in the industry, R. Crumb.  The cartoonist, a prominent figure in the underground comix movement, is well known for his critical, satirical renditions of society and his very sexual depiction of women.  Which is why it came as such a surprise to many that he decided on a very traditional, straight-forward adaptation of Genesis.  His very recognizeable art style lends itself to this book, actually, even his drawings of the women in that muscled, big-boned way he loves so much.  But I must admit that overall, I was disappointed with this book.  The failings have little to do with Crumb's art, as he is certainly a master cartoonist, but the overall package bored me.  The main problem for me, I think, is that the source material doesn't really hold up to the style of modern writing.  When I watch characters in Genesis going through four pages worth of action, and then sit down and relate all of that action in detail to another person for a full page, I can hardly believe that that is enjoyable to many people.  The lines of lineage, while Crumb did his best to experiment with different illustrations to accompany them, were dry - I would not believe one person who said that they enjoyed that part of Genesis (the straight-up text version, at least).  When Genesis was written, it was a very different type of storytelling than what we are used to today, and it's just too redundant.  The writer needed an editor in a bad way.  And while Crumb himself isn't at fault for the original text, it was his idea to do such a close, faithful adapation and therein lies the chief problem with this project.  But there were other problems too.  Many memorable stories from Genesis, the main example I can think of being Noah's Ark, were adapted by Crumb in a way that made the story pretty boring.  There are many other chapters that he drew out into some twenty pages and obviously had fun drawing, really making the most of what he was given.  He could have broken up the text for Noah's Ark to expand it to several more pages in this way and really done justice to a really lush story, but instead, its two chapters were condensed into nine, and the images he created for them were far from memorable.  That was Crumb's choice, and his choice alone that did not live up to the potential of that story.  That being said, some fairly boring sequences were depicted in ways that were memorable that I wouldn't have thought twice about when reading the text alone, and some scenes are utterly shocking just because as readers, we see the text illutrated.  A good example of this is in chapter nineteen when Lot's daughters get him drunk and have sex with him so they will bear children.  It's creepy reading about it, but worse when you see it happening and realizing what that entails.  Ultimately, I do think that The Book of Genesis Illustrated by R. Crumb disappoints because of how he decided to adapt it so faithfully, even in his very traditional rendition of God himself.  There is certainly something to be said about his cartooning, masterful as it is, and the creativity he manages to inject into a pretty flawed text, but it's not enough to save the book or make it more vital to a modern audience.

Dan said…
This comment has been removed by the author.
6:34 AM

Dan said…
Bravo . . . well said. If anything, it will validate him that much more....in the world of graphic novels. Keep posting!
6:36 AM