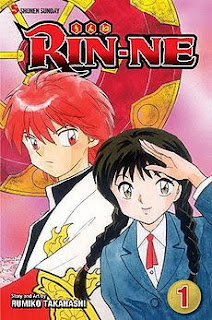 I read the first volume of Ranma 1/2 years ago, but since then, I haven't really paid much attention to creator Rumiko Takahashi (although I really do need to get around to checking out Inu Yasha one of these days, and Maison Ikkoku has been highly recommended to me).  Until now.  Rin-ne retains many of the qualities I first admired in Takahashi's Ranma 1/2, actually.  Broad characters (both innocent and mischievous) in a world where the supernatural is affecting them specifically, a good mixture of wackiness and oddity (particularly in the form of the black cat Rokumon who attempts to help Rinne) and really clear illustration with spot-on delivery and pacing.  It's nice to see that Takahashi has brought that early craft to her newer works, creating manga such as Rin-ne that seem like classics immediately out of the gate.  This story follows Sakura Mamiya, a high school girl who can see the spirit world that other humans can not, following an incident where she was spirited away by one when she was a young girl.  A mysterious boy in her class, Rin-ne, catches her attention and she soon discovers that he is half-shinigami and, for a fee, helps spirits free themselves of their earthly bonds so they can move on to the reincarnation wheel.  It takes the whole first volume to really move all of the pieces of Rin-ne's world into place, such as Rokumon coming into his employ, introducing his shinigami mother, and establishing his past, as well as Sakura's, so there's never really a dull moment from first page to last.  There's action, mystery and everything occurs pretty organically, and one can't help but get caught up in the events of the story, and enjoy every moment of it.