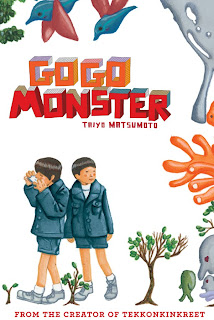 This beautifully-produced manga by Viz features quality printing, red-edged pages that form part of a picture that continues to wrap around the book (that of other-worldly spirits and creatures) with a cardboard slip that covers all but the spine and those red edges.  It makes for a striking overall look that's hard to overlook on the shelf.  The inside of the book is lavish as well, but without all of the bells and whistles.  Matsumoto puts a lot of thought into his storytelling and how it's arranged on the page, making for some very interesting panels, but very beautifully-rendered illustrations that are a little rough or loose at the author's whim, Matsumoto hardly being shy of experimenting with the medium.

The story follows Yuki Tachibana, a child who is ostracized for strange quirks, such as drawing creatures all over his desk and talking about spirits that hang around the school who no one can see, particularly of Super Star, a powerful leader of sorts.  Yuki often socializes with the caretaker of the school grounds, whom he helps in the gardens, and on occasion talks to another outcast, IQ, an older student who takes care of the rabbits at the school, and wears a cardboard box over his head.  Everyone else pretty much shuns Yuki until a new student arrives at Asahi Elementary, Makoto Suzuki, who is warned away from him, and who is seated at the desk next to him.  The two children bond over kid stuff, and Makoto takes a liking to Yuki, but he is also disturbed by the creatures that Yuki speaks of.

This is a slow-building story that doesn't ever really say outright whether the things that Yuki experiences are real or fantasy, and so readers can take a number of different readings away with them:  a child with an overactive imagination who grows out of it in favor of a friend who takes an interest in him, a boy with a gift to actually interact with the spirit world and is almost whisked away by it, etc.  It's pretty engrossing all the way through the book, but there's a real turning point that creeps me out (you'll know it when you read it), that rivals the imagination of David Lynch of things that shouldn't be happening that are happening.  The events that take place could be in the child's mind, but as readers, we experience them through Yuki's eyes and it's all very real and strange and, truth be told, frightening.  This is the kind of story that sends shivers up my spine, with some nightmarish images that won't soon be forgotten.  This is a strong, creative vision from a talented creator unafraid of putting difficult, lasting material out there.