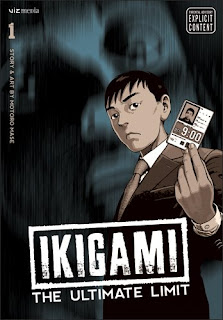 An ikigami is a notice someone gets when they’ve been selected…to die within 24 hours! That’s right. Japan has “been forced” to make everyone participate in a game of Russian Roulette to “increase the quality of life” through the National Welfare Act. A little extreme, but okay. Every citizen is injected with a syringe when they’re young, and between the ages of 18 and 24, a capsule that one in one thousand people are injected with will cause them to die. A very complex process occurs to keep the identity of the people who are to die a secret, but enough notice is given to the individuals going to die that they can spend their last full day as they please. The thinking behind this elaborate plot is to get people to live every day like their last, because no one knows if they are going to be one of the selected to die for their country at a young age. The bright side: the deceased family gets a bereavement package. I’m sure that makes it all better. On top of all of this, anyone who speaks out against the act will be immediately injected with a death capsule before they can sow their anti-government ideas. Man. Putting aside the huge disbelief that anyone would go along with this National Welfare Act, this series has the potential to be a violent, over-the-top manga along the lines of Death Note. And the first story of a citizen receiving his ikigami and what he does afterward IS quite violent. But the second story is not so much, although it is still pretty overly dramatic. Anyways, the series is tied together by a young man who is passed 24-years-old (so safe from an ikigami himself), whose job is to deliver the ikigami to the people who will die. He is a character with a conflict of conscience who wants to do what he can for his country, but questions whether what they are doing is morally right. So he tries not to think about it much.
.
The first story of the volume features Yosuke, who was sickly as a child, and brutally abused by classmates in school. When he receives his ikigami, he takes his last twenty-four hours as a sign to get revenge on those that have wronged him. The second story is of Torio, a musician who abandons his partner to cash in to pop stardom, but feels empty with the type of career he is pursuing. While utterly horrified of his approaching death, he’s equally horrified as he looks back at his life to see what he’s become. So for him, the ikigami is a wake-up call, and snuffs out the life of a young man with a lot of promise. Yosuke is more like a broken boy being put out of his misery, although he is trying to rebuild a life for himself, something that the ikigami is unwilling to allow. The whole concept of the ikigami is just ridiculous, so I can’t really make much out of the moral implications it imposes, but the idea of knowing that you have a certain amount of time to live and what exactly that means, what you would do with it, is another thing - it’s an extremely rich premise. But who is Motoro Mase trying to fool with his protagonist? Of course the main character is going to be harboring doubt of his profession. If he didn’t, the audience could hardly sympathize with him. At the end of the day, the premise is just too silly and over-the-top for me to continue with the book, although I’m certain many will really enjoy some of the questions it raises in face of our own mortality.