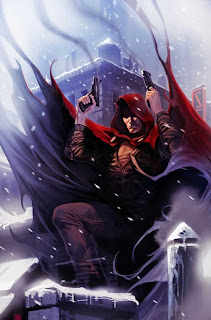 As part of Norman Osborn's inner circle, Parker Robbins aka The Hood, gets his own mini-series, illustrating how Osborn's favor during his "Dark Reign" is helping the criminal underworld to thrive. But while The Hood's crime syndicate may be getting profitable tips from higher-ups, The Hood is on somebody's radar who's getting very familiar with his habits, and there is more than a little dissension in the ranks, despite The Hood's fine speeches about how they can work together, despite what the police may say in their criminal profile data banks. We also see a little of the human side of Robbins, of his small family away from the street-level violence that is his world. And as a contrast, we see the side of him that is very not human, the demon Dormammu that he harbors, taunting him through supernatural means. The Hood is a complex character, but honestly, the stuff that we see in the main Avengers titles depicts him in a much better light. Despite Hotz's best efforts to illustrate a gritty noir comic that would go hand-in-hand with such a character as this, this series starts with a yawn. Readers are familiar with the traits of The Hood playing out in this comic, and it's done better elsewhere, with The Hood coming off as human (the original Hood mini), demonic and scary (the last few issues of New Avengers), and just plain bad-ass (the rest of New Avengers) in spectacular, memorable scenes. There's nothing memorable about this comic, though. It's vanilla through and through.