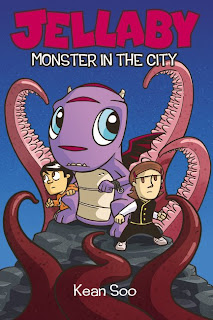 This is the sequel to Kean Soo's Jellaby graphic novel from last year. The character appeared in the Flight Explorer anthology as well, and the big purple guy's fast become one of my favorite all-ages comic characters. That being said, I was a bit disappointed in the second volume. The same things that I loved about the first book were present in this one: great cartooning, characters with real-life issues that aren't afraid to show a little emotion, nice dialogue and I still love that purple toned coloring throughout the entire graphic novel. I also like those little scenes that Soo pauses on, pacing it just perfectly where he can frame a particularly beautiful image, like when Portia is on the swing ride at the carnival at the end of chapter seven. Very nicely done. One thing that I found lacking this time around, however, is that charm and innocence that came from Portia's initial discovery of Jellaby and her "secret" that she had come to share with classmate Jason. In this latest installment, I guess it's a given to anyone they encounter that Jellaby's in a lifelike costume? I can buy it, for the story's sake, as they travel through the city to the carnival, but that whole "secret" element is just kind of thrown out the window for the narrative of this book, and it's a shame. Overall, this volume is a lot less fun and whimsical than the initial volume. While the first book pretty much consisted of little vignettes with a loose narrative that allowed the characters to maneuver through different sorts of stories and do cute things, this new book has a mission. The three companions are traveling to the carnival to try to uncover where Jellaby came from, and it doesn't have too many really nice cute moments. There's no emphasis on the secret, hardly any memorable dialogue between the characters, and by the end of the book, what they go through isn't really worth the adventure. It's just sort of...boring, I hate to say. Hopefully there will be more Jellaby coming up the pipeline soon, and hopefully with his reappearance, Soo will return the character to his playful roots.