May 03, 2009
Gene Luen Yang & Derek Kirk Kim
.
The Eternal Smile is a new graphic novel from First Second Books that collects three short stories by American Born Chinese's Gene Luen Yang and Same Difference and Other Stories' Derek Kirk Kim, both of whom won quite a bit of recognition for their previous works.
. 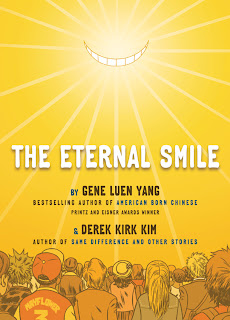 The first story collected in this book is "Duncan's Kingdom." This story follows the knight Duncan as he tries to win the hand of the princess of his kingdom by bringing back the head of the frog king who killed his king. Things aren't what they seem in this story (as is the case with all of the stories in this collection), as Duncan finds something out-of-place hidden in the frog king's palace. I was surprised to see that this story had been published previously by Image Comics in 1999. I rather like this story quite a bit - it was easily my favorite of this collection - but have no recollection of hearing about this book in the past. Ah well. I love the different art of all three stories, but Kim's pencils on this were my favorite, and I felt the story was easily the strongest here.
.
Next up is "Gran'pa Greenbax and the Eternal Smile," the story this collection is named after. Gran'pa Greenfax is a Scrooge McDuck-type character, and you can see plenty of Walt Disney and Pogo influences throughout this story as he tries to make a bigger profit than ever. I wasn't very pleased with the turn this book took when The Eternal Smile was revealed for what it is, but it did win me over by the end. Another "good" story with nice cartoony characters.
.
Last, but not...actually, it is the least. Easily the weakest of the three tales is "Urgent Request." In this colorless tale (until the end, that is), office drone Janet finds hope from her pathetic life in the form of a request for a loan of money from a Nigerian Prince. I actually did like the art of all three books, but the storytelling in this one wasn't as strong as the previous two. Utterly unbelievable to the point of frustrating, with characters that are far from admirable, this tale unfortunately closes the collection of decent stories. Overall, The Eternal Smile is a nice work from two great creators, and I'd be much more enthused about the book overall if it hadn't been for that final story, but it's a pretty big mar to the overall package, and the other stories weren't quite strong enough to make up for my having to read it. In the end, I think this will be a book that people will enjoy reading in the moment, but by year's end will be all but forgotten as more substantial works come out. Kind of a disappointing team-up of two top-notch creators.