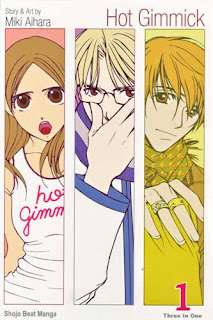 I'm really digging these fat collections of manga. There haven't been too many occasions where I've wanted to pick one up (the only other one I've purchased was Kiyohiko Azuma's Azumanga Daioh Omnibus), but my recent brush with Miki Aihara compelled me to grab this one. There's something about a thick book of comics that excites me, whether it's a Marvel Essential full of material that's probably not really worth collecting or some amazingly long-running media tie-in from Dark Horse like the Aliens Omnibus, having so many comics in one book is quite appealing whatever the material, perhaps just because you can sit down and read a huge chunk of a series at once (and there has to be something to a series that's gone on for so long, right?). Anyways, the first volume of Hot Gimmick VizBig Edition collects the first three volumes of Miki Aihara's very popular shojo manga. Like with Tokyo Boys and Girls and Honey Hunt, the main character in Hot Gimmick, Hatsumi, is a passive female protagonist whom people take advantage of and push around. But it's kind of to the Nth degree with this book (especially by the third book). If I had just read the first volume of this series, I probably wouldn't have continued, to be quite honest, but when Hatsumi's knight in shining armor, childhood protector Azusa, turns out to have some ulterior motives, things get really interesting and it's really hard not to feel for Hatsumi, despite her many deficiencies. Aihara's art in Hot Gimmick is much better than it was in Tokyo Boys and Girls, but it's still not quite as sharp as her latest Honey Hunt. The same things goes storywise, but the plot, slow-building as it is, gets really intriguing, and some of the relationships between the characters are really just plain neat, and I have to wonder how some of these relationships are going to progress in future volumes. It's interesting to see Aihara grow as a creator over these books, and I'm glad I could experience her most popular series in a big book like this. Like I said before, I probably wouldn't have gone passed volume one if I'd been buying the book in individual installments, but this VizBig Edition kind of sealed the deal for me, giving the series a little room to breathe and grow, and I will be buying subsequent volumes.