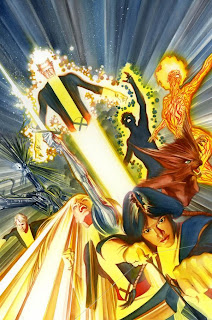 I've been reading some of Marvel's reprints of the original New Mutants book (New Mutants Classic 1 & 2) over the past few years now, so I could hardly resist taking a look at the latest attempt to revive the team in the modern world the X-Men live in. The new book is written by Zeb Wells and drawn pretty decently by Diogenes Neves, and so far consists of Magik reappearing from Limbo and her other various adventures (in which she pissed off some of the new younger members of the X-Men, whom she faces immediately upon her arrival in San Francisco) and working with Sunspot, Cannonball and Magma to locate two other members of the original New Mutants team who are out on assignment, and according to Magik (who heard it from a future version of Magma), are about to die. The other two mutants are Dani Moonstar (who is currently without powers) and Karma, and they are dealing with some sort of mutant child with mental powers and, well, there's a surprise at the end of the issue. Missing from the original cast of New Mutants is Wolfsbane, who is being abused in the horrid X-Force book. But I like this small team of characters and I think they have a nice dynamic going, everyone a little uncomfortable around Illyana, and Magma being the cold one (ironically). This is a fun debut issue with plenty of guest stars and an intriguing premise that leads the reunited friends into a backwater town in Colorado. I'm not sure exactly where this book is going yet (especially with that final page), and I don't know how this team will set themselves apart from the dozen other X-books currently being published, but I'm down for giving this book a chance.