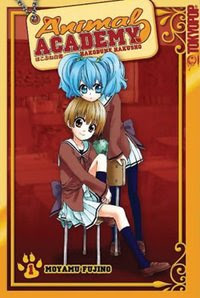 I haven't really read any ultra-cute girl manga, so I thought I'd peruse the shelf at work and pick one up - this just happened to be the one that I chose - Moyamu Fujino's Animal Academy. It follows a high school girl Neko (whose name means cat) as she makes her debut at a high school hours from her own home, the mysterious Morimori. She doesn't have many options for school (she's not the brightest), so she's really excited to get into this school, and isn't deterred when she's refused admittance upon appearing on school grounds (which is hidden confusingly in a forest). It turns out that this high school is special, as it teaches magical animals how to act human. So long as Neko can keep the secret that she's human, the teachers allow her to stay. The classes are a piece of cake (since she's already human), but it proves harder to keep up pretenses than she expected, especially as she's rooming with a possessive cat (who thinks Neko's a cat because of her name and her general oddness) who tends to slap people when she's unhappy with them. Overall, this is a fun, cute manga. It's a lot of fluff, not much substance beyond the surface elements, and no real interesting character traits, but if you take it for it is, it's a good time. I see the appeal it may hold for readers (especially younger readers) and it has magical animals, for pete's sake.

aggressively_mediocre said…
Animal Academy was a random read for me this weekend, actually. (And in my googling for more about it, came across your blog.) It is an enjoyable, easy little read, isn't it, and easy to see the appeal. Reminds me a good deal of Gakuen Alice--magical school, awkward girl who doesn't quite fit in, etc., but also in the charm and ease of it.
12:04 AM