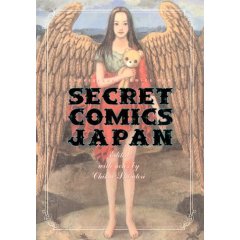 Secret Comics Japan is an anthology of contemporary (the book was published in 2000) “underground” or “secret” manga. These terms are explained by the editor, Chikao Shiratori, in his introduction, wherein he contextualizes the manga reprinted in this volume in regards to the larger manga scene in Japan. Most of the work here originally appeared in the now defunct manga magazine Garo (for which Shiratori worked as an editor), a famous publication specializing in avant-garde manga, but, as Shiratori explains, the term “underground” may no longer be applicable, as so many of the storytelling tropes and styles (and, indeed, many of the artists themselves) first appearing in Garo have since been assimilated into mainstream manga. This anthology, then, seeks to collect a sample of works representing the crème de la crème of unusual manga of the type generally only appreciated by connoisseurs.

The book gets off to a bit of a rocky start, as the opening story, written by Norimizu Ameya and drawn by cult favorite Junko Mizuno was a beautifully drawn, impeccably designed gothic fable that nevertheless left me a bit cold. It was a nice enough story of a girl who becomes a jellyfish, and I understand that Mizuno has a lot of fans, so it probably made sense to open with her piece, I was just hoping for something with a little more depth to open the book. I really disliked Hironori Kikuchi’s Gedatsu Man, a nonsensical tale of monsters vs. robots, which was weird and random seemingly for the sake of being weird and random. Kikuchi draws in a bold, cartoony style, which looks nice enough but lacks depth and weight, not unlike his story. I’ll admit that I didn’t even finish reading this story, and have no wish to read anything further by the artist.

Fortunately, after these first two entries, the book improves dramatically, as all of the remaining pieces are good to excellent. Yoshitomo Yoshimoto’s “Jr.” presents a very silly premise (Jr. is a 32-year old elementary school student…it is never explained why), which is interrupted by moments of shocking violence and pornography. Very well drawn, with characters you come to care about despite the brevity of the tale and the absurdity of the premise. Kiriko Nananan’s two short stories, “Heartless Bitch” and “Painful Love” are too brief to prove really satisfying in and of themselves, but do work well as samples from an obviously talented cartoonist. Shintaro Kago’s “Punctures” seems to be a story the artist made up as he went along, utilizing grotesque horror images to great effect. Benkyo Tamaoki’s “Editor Woman” is a funny and well crafted example of pornographic manga, which Shiratori suggests may be the last true “underground” manga in Japan. The sex is explicit and no doubt “useful,” but there is a surprising amount of interaction between the characters while fully clothed, and it’s clear that Tamaoki cares about his characters, and wants his readers to care about them, as well.

One of the best pieces in the book was Makoto Aida’s “Mutant Hanako.” A fine artist who wished to become a manga artist, Aida originally created “Mutant Hanako” as an addendum to one of his art exhibits, printed on ultra cheap newsprint and limited to 300 bound copies. The story is drawn in unlinked, crude pencils, and is at once a critique and a celebration of manga. The outrageous story involves Hanako, a young girl (she is nude throughout much of the story) and her battle against the Americans (depicted as demons) during World War II, as they attempt to drop the atomic bomb on Japan. She is unsuccessful in her attempt, and ends up strapped, naked, to the bomb as it is dropped on the city. The explosion (described by one of the Americans as a “big cock of smoke!”) and its aftermath are depicted in all of their gory detail, with one particularly disgusting scene of a girl’s slow disintegration from radiation poisoning. Miraculously, Hanoko survives, reborn as the super powered Mutant Hanako, and she joins together with a young boy to once again battle the Americans. The story doesn’t end there, and goes on to involve a good deal more outrageous violence and sex (between the two apparently adolescent protagonists), all gleefully depicted in lurid detail. Clearly, Aida does not intend this work to be taken seriously, which is exactly the point. As a fine artist, Aida admires the freedom manga artists have to indulge their more prurient interests, but is critical of them as well. The story’s treatment of the atomic bomb points out Aida’s feelings that examining serious themes through an inherently juvenile medium is ridiculous at best and offensive at worst. I’m not sure I agree with this idea (in fact, I’m fairly certain that I don’t), but I admire Aida’s creative way of examining the issue.

I also really enjoyed Usamaru Furuya’s “Palepoli,” which I first became aware of via Timothy R. Lehmann’s excellent book of interviews, Manga: Masters of the Art, and which provides the cover image for this book. Like Aida, Furuya was trained as a fine artist, and his approach to manga is highly unusual. “Palepoli” is a series of four-panel gag pages, some of which are funny, some of which are simply bizarre, some of which experiment with the medium, and many which do all of these things. Furuya changes his art style drastically from page to page, and while there are a few recurring “characters,” there is no storyline as such. Some themes do emerge, however, such as the frustration of being an artist, and a critique of Christianity, this most explicitly in the opening image, of Jesus pinned to a board and labeled alongside various types of insects and arachnids, as though part of a child’s science project. It’s difficult to describe too many of Furuya’s pages without spoiling them, so I’ll just say that they are all very good, and most are very funny. The “Golgo 13” parody in particular had me laughing out loud. I’d love to see more from this artist.

My absolute favorite story in the collection, and one of the best manga I’ve ever read, is “Swing Shell,” Yuko Tsuno’s beautiful, haunting story of a young girl’s relationship with her father after the death of the girl’s mother. I would be doing you and Ms. Tsuno a grave disservice were I to attempt to describe the story in too much more detail, as it functions more like a poem than a narrative, with images appearing as loaded symbols (bears, water) to be experienced and interpreted firsthand. The delicate linework belies a depth of meaning lying just beyond the edges of the story, and events are suggested rather than depicted. “Swing Shell” is an extraordinary work from an extraordinary talent, a true work of art created, according to Ms. Tsuno, only for herself. We are fortunate she has chosen to share it with us.

Secret Comics Japan is a very good book, with a few excellent stories which should not be missed by anyone interested in manga outside the mainstream. Hopefully, it will encourage publishers to translate more work from the featured artists in the near future.