Manga Monday: The Legend of Zelda

July 06, 2015
The Legend of Zelda: A Link To the Past
Shotaro Ishinomori

Shotaro Ishinomori is a legend in Japan.  After creating such beloved works as Cyborg 009 and Masked Rider, it's amazing that he took the time to form a story from a Super Nintendo game.  But I'm glad that he did! 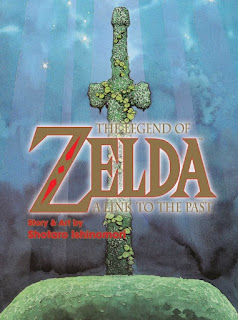 I was a subscriber to Nintendo Power growing up, and I distinctly remember reading the comics in the magazine, including Star Fox and Super Mario Brothers, but I was an RPG fan, so The Legend of Zelda sticks with me.  In fact, I played The Legend of Zelda: A Link To the Past, but even if Ishinomori had straight-up adapted the story of the game, it would still be a very different experience, merely because the mediums are so different.  Reading a book that was made into a movie is a different experience too.  But Ishinomori didn't just adapt the story from the video game - he made it his own.  He created characters for the story, and threw in some twists to keep things fresh.  But really, it was his stunning artwork that really makes an impression.  The art takes this book to a whole new level.

The Legend of Zelda: A Link To the Past is lovingly illustrated with fast-paced action sequences, beautiful fantasy scenes, and hideous monsters.  The colors are bright and vibrant, and Ishinomori has a lot of fun with the story, injecting humor and goofiness into what was a straight-forward fantasy.  Having been serialized in Nintendo Power, it does feel a little repetitive after awhile, and I found that I enjoyed it more when I read it in short bursts, like how readers would have read it back when it was being serialized.  I also appreciate that Viz published this in a larger book format to really showcase the art the way it would have been seen during its initial run.

There's really no mistaking the talent here.  After a few pages, it's obvious that a huge talent is at the helm of this story, and he takes his readers on one heck of a ride.
Manga Monday Nintendo Power Shotaro Ishinomori The Legend of Zelda