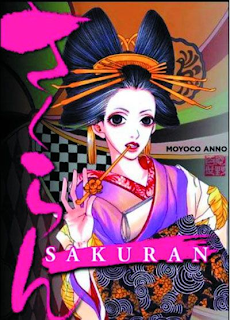 Sakuran is a historical manga that follows a brothel in red-light district Yoshiwara, specifically one girl who rises to the top of her house, Kiyoha.  Kiyoha was sold into her service at a young age, and while we know from the get-go that she ends up as one of the most sought-after working girls around, we delve into her past for much of this manga, watching her rise to become the desirable woman we see at the beginning.  Starting out as a maid for the brothel, Kiyoha eventually learns the ropes under the care of the oiran of the house.  But Kiyoha is not happy with Tamakiku house.  She hates the restrictions, never being able to leave, being disciplined for her sharp tongue by being tied to a tree and splashed with cold water, and eventually, having to satisfy the men who come through while remaining detached.  She learns how to make love by watching it happen between adults, and by the advice the other girls give, and while she comes to learn not to open up to men emotionally, she still does so, and is hurt for her trouble.  But for the most part, she learns to close herself off from her patrons, fake enjoyment, and use her smart mouth to make herself more desirable.  I really like the character of Kiyoha, and this journey that we get to experience, watching her grow up under these circumstances, is really riveting stuff.  Anno's art was lovely and detailed, and the dialogue was sharp and fun.  The classes of the women within the brothel was a little confusing - unless you refer to footnotes often to make sense of these - but you can get the gist of it within context to make some sense of what they're talking about.  Vertical does another bang-up job of bringing great manga to American audiences - this one if well worth the price of admission.