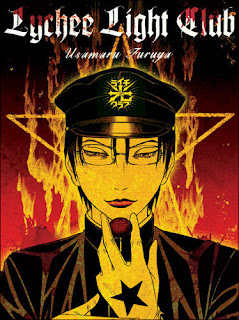 This new manga put out by Vertical, Lychee Light Club, is about a cult of middle school students from an all-boys school.  This cult, or light club, that they have banded together to create, doesn't shy away from violence or death.  Neither does the creator of this title, Usamaru Furuya.  The pages of Lychee Light Club are full of images of stabbing people, kids playing with intestines and setting people on fire, among other things.  The boys seem to watch the proceedings in a detached sort of way, taking it in stride, almost bored with the scenes bathed in blood, at least those not reveling in it.  They're all very willing to do what is necessary for the club, even give up their lives.  But this sick cult's greatest feat is bringing to life a robot that will do their bidding.  And of course, being middle school boys at an all-boys school, what they want most is pretty girls.  And so they get some, although they may have gotten more than they bargained for with one beautiful girl that the robot brings back to them.  All in all, this is a pretty fun book.  It's definitely an 18+ title, extremely violent, without remorse, with plenty of nudity and dark imagery.

My only real problem with the story was the characters.  Despite some physical differences between most of the boys, I found it difficult to keep them straight, especially as none of them really have much in terms of personality.  Oh, except for the one boy who, after all of the horrible things they do, suddenly grows a conscience when a girl becomes involved.  I think I was supposed to be rooting for him at the end.  Anyways, there's a plot point about one of the boys betraying the club, but without much investment in the characters, I really couldn't care less when the big reveal came.  I think for a one-volume work, there were just too many characters crammed into this story, with few characters really vital to the story.

The real good stuff lies in the art, for the most part.  It's just very pretty to look at.  Yes, even intestines and eyeballs can be pretty to look at.  But seriously, the art is really dark, but it's very clear and Furuya just makes the images surrounding this twisted little clubhouse look really cool.  Another really neat part of the story is between the robot and the girl he kidnaps.  I enjoyed their relationship quite a bit.  But yes, overall, Lychee Light Club is a violent, bloody, sick good time, and it's all done in a knowing, fun way.