December 22, 2010
The following are my favorite superhero comics published this year, the top titles of which will also fall into my forthcoming best comics of 2010 list. I like to do a separate list for superheroes (and manga) because literary comics tend to overshadow genre works, even though I really, really love superhero books too. I feel I need to highlight the best the year had to offer, so here are my personal favorites... 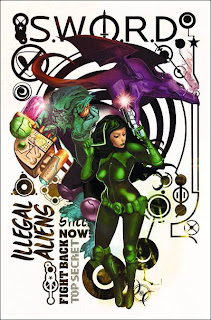 1. S.W.O.R.D. (Keiron Gillen & Steve Sanders) - Spinning out of Joss Whedon and John Cassaday's excellent run on Astonishing X-Men is this short-lived superhero story that takes place on a space station in Earth's orbit, where the very capable Agent Brand protects the planet of extraterrestrial threats.  With a fun crew of characters, including X-Men Beast and Lockheed, this book is one of the funnest comics that I've ever had the pleasure of reading, right out of the gate, with a great balance of action, humor and verbal sparring, and clear storytelling courtesy of Steve Sanders.  Gillen set up a great dynamic here between the characters and I was wholly impressed by what the creators did with each character right up to the end.  Easily the most memorable superhero book I've read in years. 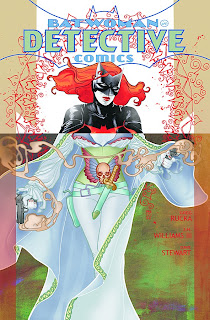 2. Batwoman: Elegy (Greg Rucka & J.H. Williams III) - Collecting content from Detective Comics, this story focusing on Kate Kane, aka Batwoman, is ridiculously entertaining.  Greg Rucka fleshes out some pretty great characters in this book, and provides a fun, dark story for J.H. Williams III to illustrate the hell out of.  Williams really works the medium, with traditionally-laid out panels when the story focuses on Kane's civilian life, to a more fully-realized painted look with elaborately-designed splash pages for when Batwoman is doing her thing.  This is eye-popping stuff.
3. Black Widow (Marjorie Liu, Daniel Acuna, Duane Swierczynski & Manuel Garcia) - Espionage and intrigue don't get much better than this.  The series begins with a mystery surrounding the Russian spy's past that involves shady characters, and continues with plot twists and revelations as it proceeds.  Natasha hasn't been this entertaining since Greg Rucka's run on the character, with the cat-and-mouse games, backstabbing and danger-around-every-corner vibe that makes a spy story like this so much fun.  I'm continually impressed with what the creators bring to the table in this pulse-pounding title. 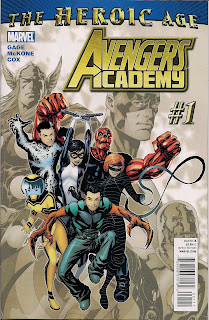 4. Avengers Academy (Christos Gage & Mike McKone) - An all-new team of young heroes emerges in this Avengers title, trained by familiar faces like Tigra and Hank Pym.  The compelling young cast has its share of drama and action as they face old foes and inner demons alike.  The art is smooth and flows nicely, with some of the best character designs I've seen in a very long time.  Easily the best Avengers book out there right now.
5. Fantastic Four (Jonathan Hickman, Neil Edwards & Steve Epting) - One minute epic with Galactus whisking Reed across the universe, the next down to earth as Ben experiences life without a rock-hard exterior, this book has struck a chord with readers in one of the best runs that the title has seen in years.  Hickman goes to really interesting places while bringing back a wealth of popular villains with new cool ideas.  And Epting and Edwards both did fantastic jobs bringing Hickman's vision to life.  It feels like breath of fresh air. 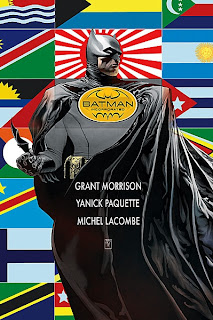 6. Batman Incorporated (Grant Morrison & Yanick Paquette) - Only two issues of this new series hit the stands before the end of the year, but it's already begun with a bang, courtesy of Grant Morrison's quirky writing and great story ideas, plus Paquette's nice, dark art that complements it nicely.  Batman Inc. over-the-top and action-packed as Batman travels the globe recruiting allies in various countries to fight crime the Batman way, beginning with a two-issue story that sees him in Japan facing off against the ghoulish Lord Death Man.  This book is quite the ride. 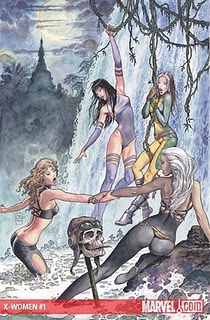 7. X-Women #1 (Chris Claremont & Milo Manara) - This 48-page one-shot packs in a lot of story, following several of the women from X-Men as they maneuver through several exotic locales in a rather compelling story.  The big attraction here is the art, which is stunningly illustrated by legendary European artist Milo Manara, who's known for his sexy cartooning.  He doesn't disappoint with his flirty women and realistic, detailed art, and neither does this overlooked comic that sort of reminded me of a Terry and the Pirates adventure strip in a weird way.


8. Firestar #1 (Sean McKeever & Emma Rios) - Another one-shot, this story focuses on a very three-dimensional Angelica Jones as Sean McKeever balances her superhero life with plenty of drama at home when her father begins to date the mother of a girl who made her life hell in high school.  Emma Rios blindsided me with her fantastic art on this title, providing a cartoony style with lots of movement, while managing to keep the panels looking rich and elegant.  I love the poses that Rios gives Firestar as she flies around in her bright red and yellow costume.  This was just a perfect pairing of creators. 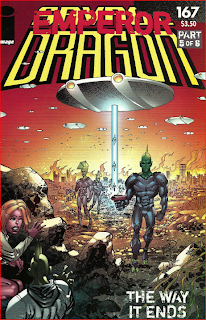 9. Savage Dragon (Erik Larsen) - Easily the most unpredictable book out there, Savage Dragon surprises week after week with fast-moving storylines that hardly give you a moment to catch your breath.  Lately, Larsen has really stepped up his game with shocking plot twists in an ever-changing world where truly anything can happen, without relying on a reset button like other creators would fall back on.  This series has been going for such a long time that I think people kind of forget that it's still out there - but not only is it still around, but it's better than ever.  Not enough people talk about this title that boasts stupendous action in a rich superhero world. 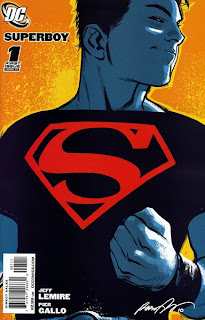 10. Superboy (Jeff Lemire & Pier Gallo) - Connor Kent, the current Superboy, tries to make a life for himself in Smallville, never mind that he was cloned from the DNA of Superman and Lex Luthor, in this new series from Jeff Lemire (Sweet Tooth) and Pier Gallo.  Plenty of familiar faces grace the pages of this title, including villains like Parasite and Poison Ivy, while pairing Kent with a sidekick who'd love nothing more than to be a mad scientist, and keeping his distance from Luthor's hot niece.  This is just a fun, colorful new superhero title.