Speak of the Devil #1 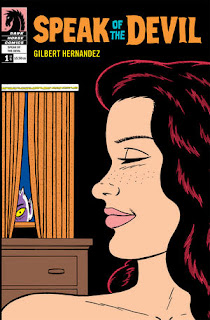 The latest offering from Love & Rockets co-creator Gilbert Hernandez is a six issue mini-series from Dark Horse. I believe it's supposed to be one of Gilbert's Palomar character's (Fritz') movies, in comic form, which is one reason why it has that sort of C-Movie Grindhouse feel to it. It has some intentionally bad, but knowing, dialogue in a story that's pretty over-the-top. The book follows teenager Val, who decides to become a peeping tom, donning a ghoulish grinning mask and spying on her neighbors and, well, her father having sex with her beautiful step-mother. The dialogue that establishes the relationships and sets the tone of the series is as follows: "Walter...She just misses her mother. I was the same way when my father re-married." To which he replies "Mmm...I can't really say I can blame our peeping tom too much, Linda." I can see how some people won't really like the latest Gilbert book, but for what it is, I think it's a great offering and if anything, you've got to appreciate the art which is, as usual, some of the best out there. I think this will be a fun series and I'm looking forward to more. B+

Unknown said…
Great news ! I loved the Palomar series and their somewhat bizzare but captivating atmosphere. Will keep on eye on that one :)
3:41 AM

Yedna said…
I read Jamie H's complete, 'Locas' stories, and then I wanted more. I've read a couple of the L&Rs trades since, and I really enjoy both Hernandez brother's works.

I picked this one up about a month ago. I really enjoyed it, and I'm looking forward to #2 coming out this Wednesday.

I agree that the writing's a little hokey. But as far as the storyline goes, you have to give Gilbert an 'A' for originality.
10:57 AM