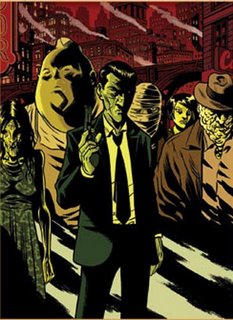 The Damned is a new series from Oni Press debuting in October. The very first issue of the series is double-sized and introduces its readers to Eddie, a man of foul habits cursed to keep returning from the dead, provided someone out there sees fit to revive him. Fortunately for him, he’s in high demand. Between the three demon families that traffic souls in the city, there are always plenty of figures planning to send him on a dirt nap, beat him for information, or send him on some task or another to pay off his numerous debts.

In this particular issue, following a great introduction to the world involved, Eddie is assigned by “Big Al” to uncover what has become of a demon involved in negotiations between two of the warring demon families, forcing Eddie into a confrontation with an old flame, and to a demon whorehouse for any sign of a potential witness. This book has some really nice art and monster designs from Hurtt and is paced to perfection.

When it comes down to it, this is basically a gangster book with supernatural figures. The Godfather with demons, if you will. I’m not a big fan of mob stories generally, so that may be why I didn’t find much of interest in this story. It’s a fine blend of two genres, with some fresh ideas, but in the end, it wasn’t intriguing enough to make me want to read more. And the cast of stock characters didn't help to dispell my indifference. On the bright side, you can check out the double-sized first issue for yourself at a bargain-priced $3.50 if it sounds like something that will tickle your fancy. C