December 26, 2006
What a great year in comics. I can't say that enough. It was a really exceptional year for the medium. Any other year, any book in my top ten could have pegged down the number one spot. The books up through the very last on my list could have been on any other top ten list. In fact, there were plenty of books unable to make the cut this year that I really hated to see go unsung. But in the end, twenty-five is a lot of books and the line just has to be drawn at some point. And since the list is a long one, I'll be counting down my favorite comics of 2006 in two parts, the first part going up to number eleven, with the top ten being published tomorrow. I highly recommend every single comic on this list. Enjoy!
25. Niger #1
Leila Marzocchi
. 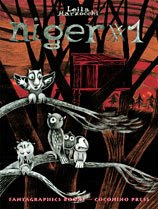 "This is one of the most gorgeous books I've ever read, constantly forcing me to admire each page as a work of art in itself. Just flip through the book if you don't believe me, even as early as the first page as the red hues bleed into the clouds in the sky for a really spectacular effect."
.
Full Review here.
.
24. Ghost of Hoppers
Jaime Hernandez
.
"The situations, how people reacted to things, seemed more life-like than anything I’ve ever experienced in comics, whether it was someone caught up in their own thoughts or something less typical like a stalker waving a knife in a woman’s face. And in light of that realistic world (and realistic eccentricities of the characters therein), the supernatural elements that creep around on the periphery of the book are that much more effectively scary."
.
Full Review here.
.
23. Krazy & Ignatz 1937-1938: Shifting Sands Dusts Its Cheeks In Powdered Beauty
George Herriman
.

"The Sundays featuring a group of crazy characters from Coconino County is really just very endearing and charming. When I picked up my first Krazy & Ignatz volume, I didn't expect to get much out of it, particularly with the disorienting way the characters talk within, but you kind of fall into a rhythm and it's a really rewarding experience by its conclusion."
.
Full Review here.
.
22. American Born Chinese
Gene Luen Yang
.
"The parable of the Monkey King is a really fun, whacky story that the art is perfectly suited to tell with its cartoony look. Jin Wang's childhood was equally as fun to read, with his cute little mistakes and his first crush, but of course growing up in a school primarily made up of White students led to quite a bit of name-calling and teasing that ultimately made him feel ashamed of his heritage. The story is pretty straight-forward, although some revelations at the end of the book add some layers to what's been going on throughout..."
.
Full Review here.
.
21. Eden: It's An Endless World!
Hiroki Endo
.
"Pencils just don't get much better than this. From cybernetic parts to action sequences to panels depicting wave after wave of gore, Endo is a master of his craft. That being said, the world he creates for us in light of the human plague that wiped out most of humanity, is pretty damn interesting too."
.
Full Review of Volume Three here.
.
20. Mouse Guard
David Petersen
. 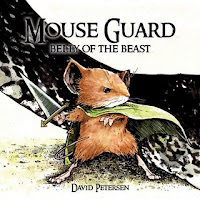 "It really speaks to David Petersen's craft that much of the book is really a showcase of nature. It goes hand-in-hand with the beautiful mouse designs he's created for his book, simple but expressive. It's amazing what Petersen can do with the mice, given that most of their expressions are conveyed through only their eyes and ears. It just further exemplifies that he really is a thoughtful, interesting cartoonist."
.
Full Review of Issue Two here.
.
19. The Complete Chester Gould's Dick Tracy (Volume One)
Chester Gould
.
"They're addictive little stories without having to wait on the edge of your seat for the story to continue in the next day's paper. I was surprisingly charmed by the melodrama, Dick's relationships with Tess Trueheart, Junior and the police force, and the often complex coincidences that lead to cases getting solved."
.
Full Review here.
.
18. Naoki Urasawa's Monster
Naoki Urasawa
.
"This is one of the more higher quality manga that I am presently reading. Japan's Master of Suspense does a stellar job of creating tension and, well, suspense, with this mystery thriller. And each chapter seems to get better."
.
Full Review of Volume Four here.
.
17. Athena Voltaire: Flight of the Falcon
Paul Daly & Steve Bryant
. 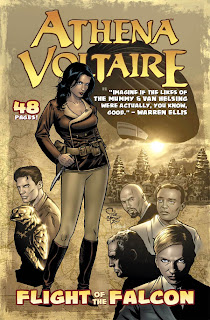 "I was actually surprised by how much I enjoyed rereading the first issue. The beautiful art, the wonderful characters, the wit of the dialogue...it's all there between the impressive action sequences in 30's adventure comicstrip tradition. Teeming with jungle locales, evil nazis and good old-fashioned airplace chases, this is one comic that absolutely can NOT be missed."
.
Full Review of Issue One (APE Edition) here.
.
16. Fun Home
Alison Bechdel
.
"It's an interesting experiment in non-linear storytelling that really works wonderfully and leaves readers spellbound, putting just the right amount of emphasis where its needed without losing sight of the overlying themes."
.
Full Review here.
.
15. Sidescrollers
Matthew Loux
.
"This book is full of laughs, demonstrates masterful pacing, and really doesn't allow one to put it down easily. The characters contained within are really fun characters to spend time with too, but it's really the dialogue that makes this title stand out so much. It's whitty, smart and just captures the world these characters live in perfectly."
.
Full Review here.
.
14. Octopus Girl
Toru Yamazaki
.
"Toru Yamazaki continues to amaze with his wonderful characters in this disgusting over-the-top dark comedy/horror title. This book is all about the excess and the artist indulges in abundant amounts of snot, blood, violence and death as our anti-heroes rip the flesh from mens' backs and swallow little girls whole. But it's all really great (and to be fair, the little girl was torturing a fish at the time)."
.
Full Review of Volume Two here.
.
13. Acme Novelty Library #17
Chris Ware
.

"It's all very emotional and feels realistic, drawing you into this world of horrifying school drama, forcing you to experience the pain of that awkward age through these characters, and doing a damn fine job of it. We can all relate to some aspect of the story at hand, and Ware has a way of making it all come rushing back."
.
Full Review here.
.
12. The Fate of the Artist
Eddie Campbell
.
The Fate of the Artist "is wildly imaginative and insightful. Campbell pushes the medium of comics, kicking and screaming, as he creates a masterpiece with his seemingly endless supply of creative juices."
.
Full Review here.
.
11. Dragon Head
Minetaro Mochizuki
.

"As is typical with the series, the art is fantastic without a chapter passing that doesn't bring with it a truckload of suspense." (From Volume Three Review)
.
Full Review of Volume Two here.
.
And...the Top Ten is here.