December 27, 2006
Here we go. Following up on the bottom part of the countdown from yesterday, here are the ten best books of 2006. With a year full of fantastic books, this was a hard list to write up, but I'm completely satisfied with the end result. I love every book on this list and encourage everyone to seek these titles out.
.
10. Lost Girls
Alan Moore & Melinda Gebbie
. 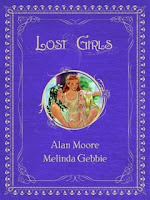 "Gebbie's art in this book is beautiful. She tries her hand at different techniques that keep the story fresh and interesting, while Moore weaves a tale that seems pretty epic by its conclusion, complete with some genuinely erotic scenes."
.
Full Review here.
.
9. Nana
Ai Yazawa
.
"It's always those little moments in Nana that get me, where the characters pause in shock or try to brush something off as insignificant or just stare longingly up at a window, walk into a room worried... Ai Yazawa is just amazing. I can't say it enough. Her characters are so fully-realized that I hurt when they hurt. I watch in complete amazement as the story unfolds."
.
Full Review of Nana from July's issue of Shojo Beat here.
.
8. Hikaru No Go
Yumi Hotta & Takeshi Obata
.
"It's hard to believe that a manga about a board game of all things can be this suspenseful...As usual, Obata's art is stellar and Hotta knows how to keep his audience on the edge of their seats" (From reviews of Volumes Four and Six)
.
Full Review of Volume One here.
.
7. Castle Waiting
Linda Medley
.

"This is a wonderful first volume of the world of Castle Waiting, full of laughs and high adventure. I highly recommend this. If anyone out there likes Bone at all, there's really no excuse not to get this. It truly captures the feel of a fairy tale, without the typical tropes associated with them."
.
Full Review here.
.
6. Astonishing X-Men
Joss Whedon & John Cassaday
.
"Joss Whedon has said that he loved Morrison's run and that not enough has been said about it, and thus is building upon it here, where he is also introducing several really cool elements to the mythos. He's respected the preceding run and has taken advantage of elements that Morrison has left in his wake, just as Whedon has been creating things that whoever follows him on this series can pick up on and take advantage of to tell really cool stories...This is really the best stuff that superhero comics have to offer presently."
.
Full Review of Issue 18 here.
.
5. Ode To Kirihito
Osama Tezuka
.
This "rich, deep work...has the feel of a real epic as the characters travel to several exotic locales in their quest to escape tyranny and to expose the culprit behind the disease that leaves people in the form of Dog Men...An absolute pleasure. This work deserves all the acclaim its garnered."
.
Full Review here.
.
4. Sloth
Gilbert Hernandez
.

"Disturbing images are speckled throughout an extremely thought-provoking work, one of those few stories I feel compelled to go back to and re-read. Hernandez demonstrates his mastery of storytelling in a novel that makes him more accessible than ever to new readers, not to mention the beautiful artwork that graces his pages."
.
Full Review here.
.
3. Luba: The Book of Ofelia
Gilbert Hernandez
.
"Gilbert Hernandez is one of the best storytellers in comics. He weaves these tales of Luba's extended family and their affairs and tribulations and brings them to a sort of epic proportion, although the stories themselves are very small and intimate. He just writes them so grand and expertly...Over the course of the stories collected here, we see the sprawling cast grow in their own ways and go to places dark and light, with some stunning conclusions and revelations to their stories that are sometimes only hinted at. It's wonderful. It's complex...The creme de la creme."
.
Full Review here.
.
2. Death Note
Tsugumi Ohba & Takeshi Obata
.
"If there’s any book out there with more action and thrills than Death Note, I would certainly like to know about it. This book embodies the term “page-turner.”...If you like mainstream genre comics, it really doesn’t get much better than this."
.
Full Review of Volume Seven here.
.
1. Adventures In Oz
Eric Shanower
. 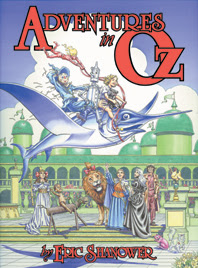 "This is what Abadazad wishes it were: a magical, wacky universe with loveable characters in a beautful all-ages fantasy, crafted with a real love for the material. I'm sure that this book serves as an absolute treat for any fan of Oz, but has worked backwards for me and made me a fan of Oz. I fully intend to read Baum's works in wake of this fantastic read. Shanower brought the characters of Dorothy, Scarecrow, The Cowardly Lion and others to life with a craftsmanship that could have only made Baum proud, making the life in the bustling Emerald City seem to breathe, transporting any fortunate reader to its streets and off the beaten path on the adventures the characters partake...Anyone who's read Age of Bronze knows what gorgeous art Shanower can produce, but this fantasy setting is perfectly suited to his abilities: rich, detailed environments, vibrant colors and top-notch cartooning make this an experience wholly unlike any other as the tenants of Oz battle witches, Ice Kings and trolls, and navigate through uncharted swamps and tundras...I give this book my highest recommendation and really can't convey what a wonderful experience this was to read. Anyone who loves comics has to find something to love about Shanower's phenomenal accomplishment."
.
Full Review here.
.
And that's all, Folks. Another year come and gone. With such art being realized now, the medium is really in a golden age and we can certainly expect some stellar offerings this next year as well. See you all on the other side.

myk said…
Oh, yes. I totally forgot about HIKARU NO GO. I bought the first volume just a week ago, after overlooking it for months. I mean, it´s a book about Go after all...