September 03, 2015
YA may have blown up over the past decade, but it used to be a small section of bookstores.  In the early nineties, it consisted mostly of "teen thrillers," which mostly featured dark mysteries and serial killers, although there was some supernatural fare as well.  The authors of those days were ahead of their time and built an audience in teenagers, and paved the way for the YA that is beloved by so many today.

In the late-eighties to mid-nineties when teen thrillers were thriving, the internet was just getting its feet wet, so there wasn't a lot of information to be found on-line about the books coming out around this time.  I didn't have a really reliable source to find out when new books were coming out from authors I enjoyed, which is a weird concept given how everything is at people's fingertips today.  I asked bookshop clerks about books often, and would really just sort of rely on them to stock the books I loved on their shelves. 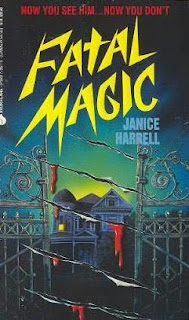 Janice Harrell had quite a career before she delved into teen horror, although she always seemed to have an affinity with teen characters.  Her first book seems to be part of Pocket Books' romance series line First Love From Silhouette, featuring teenagers' first love.  The novel, Puppy Love, was #67 in the line, and was published on November 1st, 1983.  She would continue to write nine more novels for First Love From Silhouette over the next four years.  Harrell also wrote books for the Two by Two series during this time, including One Special Summer and Secret Hearts, for Warner Books.

In December 1989, Janice Harrell wrote her first novel just for young adults, Wild Times at West Mount High for Simon Pulse, in the romance genre.  She followed it up the next year with Andie and the Boys, which would spawn two sequels, Dooley Mackenzie is Totally Weird and Brace Yourself, P.J. 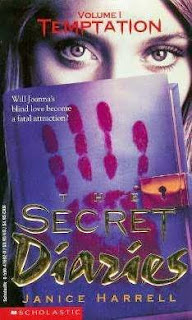 Harrell would continue to write romance over the next year, for adult readers, but she would also publish her first thriller for young adults, Flashpoint, a murder mystery from Simon Pulse.  Then, after a brief foray into middle grade fiction with books like Tiffany, the Disaster, she would devote her attention on young adult novels for the remainder of her career.

Her next several books would be teen thrillers/mysteries, published by a variety of publishers, including Simon Pulse (The Murder Game), Harper Collins (Dead Girls Can't Scream), and Avon Flare (Fatal Magic).  She would also release The Darkroom as part of Harper Collins' UK imprint Lions, through their Nightmare line, which was meant to compete with other successful teen thriller lines such as Point Horror.  She would be in the company of such YA greats as L.J. Smith, Nicole Davidson, T.S. Rue, Nicholas Adams and Bebe Faas Rice. 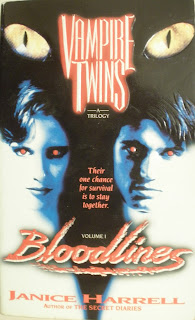 Scholastic would publish a series by Janice Harrell in 1994, beginning with Temptation.  One book would be published every month.  The series, Secret Diaries, would end up being a trilogy incorporating strong elements of romance, suspense and mystery between a group of teenagers.

Harrell would turn to the supernatural for her next releases, beginning with Vampire Twins, following immortal brother and sister Paul and Anne Marie Montclair in an epic horror story that was originally advertised as a trilogy, but would end up traversing four novels, probably due to its success.  The series would be published through Harper Collins, and through the publisher's Nightmare line in the UK.  Yes, there were other supernatural books out there at this time, but the teen market was still dominated by teen thrillers, so these books definitely stood out on the shelves.

Her next books would be a two-volume series, also about vampires, with a heavier focus on romance.  Vampire's Love would be published by Scholastic through their popular Point Horror line, a direct competitor of the Nightmare line she had previously published through with Harper Collins.  Point Horror was noteworthy for not only its popularity, but for launching YA giant R.L. Stine's career.  Caroline B. Cooney, Richie Tankersley Cusick, Carol Ellis, Diane Hoh and Barbara Steiner are just a few of the big names attached to Point Horror.  Janice Harrell is the only author to publish books through both Nightmare and Point Horror.

Janice Harrell would be best known for her two vampire series, but she would go on to publish a pair of thrillers to round out her career, Twin Sisters in 1996, and its sequel Twin Terror in 1998. 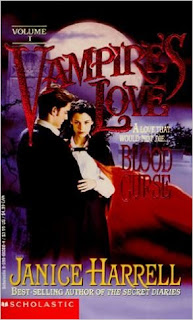 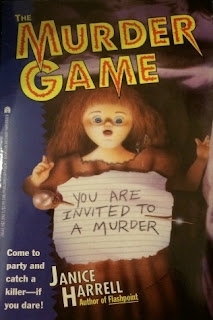 Rina is beautiful, mysterious, and alone.  She was sixteen when her mortal life was stolen - two hundred years ago.  Now she walks the earth cursed.  Undead.  But that was before James...

James knows there is something very strange about Rina.  He has never met anyone so mysterious - or so deadly.  But James has a girlfriend who'd do almost anything to keep Rina away from him.  What Chelsea doesn't know is that Rina is a vampire: Her love for James is almost as powerful as her need for blood.  And Rina always gets what she needs...

Their love for each other is a blessing and a curse...

Anne Marie Montclair: Devastated by her mother;s tragic death, she hungers for an escape from her misery.  Must Anne Marie abandon her beloved twin brother to find the happiness she craves? 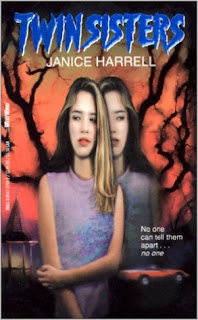 Paul Montclair: Haunted by his contempt for the father who abandoned him, he searches for the power to forget his past.  When Pauls' hatred drives him to betray Anne Marie, can he regain the trust of the only person he truly loves?

The thrilling story of a sister and brother torn apart by the unthinkable secret that is their destiny.

With trembling fingers, he opened the trunk and stuffed the scrap of material back in. She must have seen the bit of skirt fluttering there as she jogged past.

But she had kept running because what she saw meant nothing to her - the problem was that she might remember it later and put two and two together.

Suddenly he knew he was going to have to get rid of her... 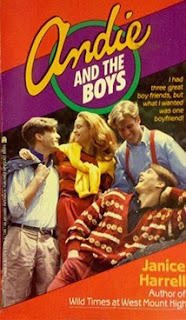 Stephanie and Matt argued at the party, and when Matt left in anger, he never saw the truck. The police say it was hit-and-run, but Stephanie knows better--she thinks it was murder. But who could have done it? Could one of her friends be a killer who waits for the perfect moment to strike?

The ad read "You're invited to a murder..." It was to be a party, complete with a pretend corpse and plenty of clues. Only Meg Redding knew the host's real motive: Dusty Ellis was determined to catch his twin sister's killer--even though the police had ruled her death an accident. But when the corpse is found, it's real. And Dusty's the prime suspect...
Janice Harrell teen thrillers Vampire Twins Vampire's Love YA YA Pioneers