August 27, 2015
YA may have blown up over the past decade, but it used to be a small section of bookstores.  In the early nineties, it consisted mostly of "teen thrillers," which mostly featured dark mysteries and serial killers, although there was some supernatural fare as well.  The authors of those days were ahead of their time and built an audience in teenagers, and paved the way for the YA that is beloved by so many today.

Something I always really enjoyed about browsing for new teen thrillers was the covers.  Like with old video stores, it's fun to pick up a new title that you haven't seen before, drink in the illustrated image (as almost all teen thrillers were illustrations back in the 90's) and read the little teaser line.  It was usually something kind of cheesy like "Now I lay me down to die" (Kate Daniel's Sweet Dreams), but every once in awhile a line would send a shiver down my back and I would think to myself that the book was going to be awesome.  I still really like Christopher Pike's Spellbound teaser - "You can close your eyes - It won't help."


YA Pioneers
Kate Daniel is a prime example of why I am doing this series of "YA Pioneers" posts.  I absolutely loved Kate Daniel's books growing up, and as YA was a big part of my life growing up, Kate Daniel was also a big part of it.  It makes me sad that she's kind of a lost author.  In researching her, I've come up with almost no information on Kate Daniel or her career, almost like this author that I cherished never really existed.  But she did, and her books are still out there in used bookstores and in e-book form, where new readers can re-discover her even today.  She was a pioneer of the YA industry and she deserves recognition for her contributions with the great books she released that many people loved. 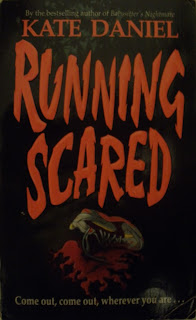 Kate Daniel's first book was Baby-Sitter's Nightmare, published on April 28, 1992 by Harper Collins, the publisher she would continue to publish all of her teen books through.  The book would go on to become a bestseller, an honor proclaimed on the covers of her forthcoming books, and would spawn a sequel years later. The book follows Alice Fleming, who has been baby-sitting in houses that have been burglarized, resulting in her status as the number one suspect.

Daniel followed her bestseller later that same year with Sweet Dreams, about a girl plagued by dreams of her parents' deaths, and Teen Idol, where a string of strange accidents occur on a film set.  She also contributed the first of several short stories that would appear by her in anthologies from DAW Books.  Her story "GENIE, Inc." appeared in Aladdin: Master of the Lamp.

Running Scared came out in August of 1993, and would also become a bestseller.  This was probably the very first book that I ever called my favorite book.  I would be searching for a thriller as good as this one for years to come.  The story follows a girl who was placed in the witness protection program, and is discovered by her pursuers.  Running Scared is the definition of a page-turner, with non-stop action, and solidified Kate Daniel as one of the great thriller authors in my mind. 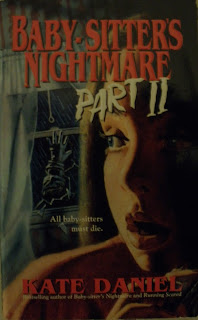 Kate Daniel's career in YA would come to a screeching halt in 1994 after the publication of End Game.  Her YA career was short, lasting over the course of only three years, but she was very productive in that time, and left quite a mark.  She would go on to contribute short fiction to several more anthologies from DAW Books:  "Christmas Presence" would appear in Christmas Ghosts in 1993, and "Witch Doctor," in Witch Fantastic in 1995.  She would also have stories published in the anthologies Alien Pregnant by Elvis (1994), By Any Other Frame (1994), Enchanted Forests (1995), Highwaymen: Robbers and Rogues (1997), and Chicks 'n Chained Males (the third anthology in the Chicks in Chainmail series) (1999).  Her stories would be featured alongside such science fiction/fantasy greats as Mercedes Lackey, Harry Turtledove and Elizabeth Moon.  Kate Daniel would also co-write Polar City Nightmares with Katharine Kerr in 2000.
Kate Daniel YA titles
Baby-Sitter's Nightmare (1992)
Sweet Dreams (1992)
Teen Idol (1992)
Running Scared (1993)
Sweetheart (1993)
Baby-Sitter's Nightmare Part II (1994)
End Game. (1994) 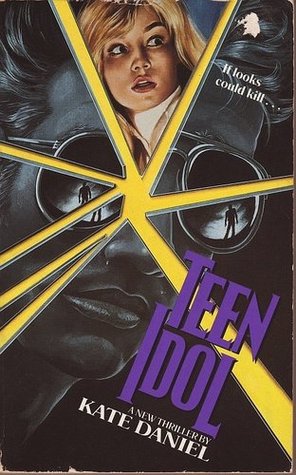 Baby-Sitter's Nightmare Part II
When someone starts making prank phone calls to baby-sitters, Karin isn't scared.  Even when Karin is attacked on the way home from a baby-sitting job, she thinks it's all a joke.  But then Karin's best friend is killed while baby-sitting.  Now no one's laughing...  Now everyone's dying.  But Karin still isn't scared.  She thinks she knows how to win the killer's game.  But she doesn't know what she's up against.  The killer hates baby-sitters - a baby-sitter let the killer's sister die.  Now all baby-sitters are going to pay.
Running Scared

But Donna told the police, and they promised to protect her.  Now she has a new name.  A new home.  A whole new identity.

But someone else knows what Donna saw.  He knows who Donna is.  And he's going to get her, wherever she tries to hide.

Jan is terrified to go to sleep.  Every night she dreams of the blaze that killed her parents.  And as the dreams grow more vivid, Jan begins to suspect that the fire wasn't an accident - someone murdered her parents, and she thinks she knows who.
﻿
Kate Daniel YA YA Pioneers